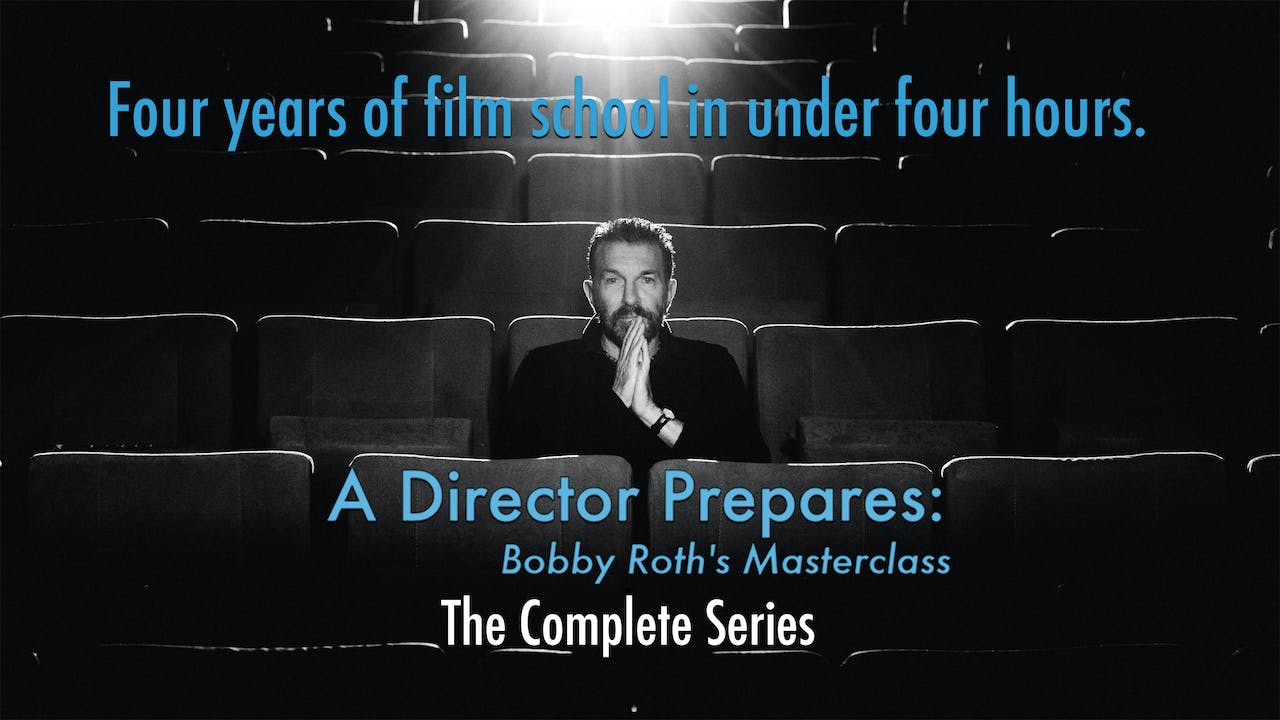 Praise for A Director Prepares:

"Master Filmmaker Bobby Roth has interviewed professionals of every movie discipline and encouraged them to speak openly about their process. This is a gift - and any student or movie fan without access to the pros should take advantage of it and learn about the real nuts and bolts of filmmaking."
-Bob Mandel, AFI

“A fresh and personal take on some of the fundamental principles of filmmaking. Drawing on examples from his considerable work as a TV and movie director, Roth has produced a dynamic and informative series that engagingly combines theory and practice. Masterclass is filled with both practical advice and inspiration from Roth and his collaborators, as well as many well known actors he's directed. Anyone who wants to make movies will find this series rewarding.”
-Mark Jonathan Harris, USC

“An essential guide for film teachers and directors interested in enhancing their tool kit for directing features, television and all narrative content. I highly recommend this as a great creative primer on directing from someone with enormous experience who delivers the information with clarity, focus and clips from his own work."
–Michelle Satter, Founding Director of Sundance Labs’ Feature Film Program

“A fascinating, engaging and practical examination of the director’s process with clear, accessible explanations, excellent examples and illustrations as well as focused, insightful interviews with many of the director’s key creative collaborators. The series provides a unique and compelling window into the complex work of the film and television director and will be invaluable to aspiring filmmakers everywhere.”
-Sharon McGowan, UBC

“[A Director Prepares] will inform, entertain, and inspire those new to the industry. Highly recommended.”
–Library Journal

“Nicely filmed and edited with flair, A Director Prepares provides valuable lessons about preparation prior to shooting and how one can combine efficiency with creative spontaneity in overseeing the making of a film or TV program. Recommended.”
–Video Librarian

“A valuable resource for aspiring or beginning film makers”
-Susan Ruskin, University of North Carolina School Of The Arts

“Superb… Anybody interested in becoming a filmmaker whether age 6 or 60 should watch these. They are great tools.”
– Howard “Hawk” Koch, Filmmaker and former President of the Academy of Motion Picture Arts & Sciences

“A remarkable piece of work and one that, I’m sure, will be invaluable to aspiring directors.”
-Ron Silverman, Filmmaker and former Dean of Studies at AFI

"A fantastic tutorial… I'm sure your students will be better directors because of your efforts."
–Mike Kelley, television creator/show-runner

Bobby Roth was born and raised in Los Angeles. He studied philosophy and creative writing at UC Berkeley before graduating with a BA in Cinema from USC in 1972. He went on to film school at UCLA, where he received his MFA in Motion Picture Production in 1975. Since then he has directed more than eighty episodes of television, twenty-five TV movies, and thirteen feature films. He was a founding member of the Independent Feature Project and the first Co-Chairman of the DGA’s Independent Feature Committee. His films have won countless awards and have been exhibited in over 100 international film festivals. He also teaches film seminars throughout the world. He still resides in Los Angeles, actively working in the entertainment industry.

Connect with us at http://bobbyroth.net/